These are the main articles from our quarterly epistle.
Much has changed, most has stayed the same over the past months.
The Garage has remained open 8:30am to 2pm everyday, including weekends and
holidays. Closed Mondays and Thursdays.
Please visit and have the best coffee in town FREE.
Hand-washing upon entering and social distancing are required.

Mental illness is not a crime.

Addiction is not a crime.

Being poor is not a crime.

Being other than white is not a crime.

Any of them can be a death sentence.

This is a sort of update/rewrite of a speech Emilie Finn gave at Yavapai College on Martin Luther King Day, 2006. She was a full-time worker at the Garage then; now she is an Episcopal priest in Surprise, AZ. I have her permission for the changes made, which include substituting me for the first person narrator. After all, I am her mother.

This is a silly topic.

I don’t know anything about “the homeless.” I only know the people I hang out with almost every day. A few volunteers and I host Quixote’s Garage; a safe place for anyone who needs somewhere to be during the day. Over the 15 years that it has been open we have met literally thousands of men and women who, for whatever reason, find themselves in need of a place like ours: Someplace to relax, feel safe, get out of the weather, have a cup of the best coffee in town free, or just sit and talk.

Not all of our guests are homeless. Many do not live in a building that they pay for or have paid for. Some have apartments, but no place they feel at home. Some have no address, sleep outside, and feel at home.

Homeless is not a noun. It is an adjective that can be used to describe individuals. For instance, a local woman who by her own admission screwed up as a teenager, became an addict, had children she gave up for adoption. A man who came to Prescott maybe 20 years ago, had a job and a place to live, got cancer and lost all of that. He survived the cancer, but not loss of self respect and dignity that comes with being poor and unable to pay your own way. And the vets who come to Prescott damaged by their time in the military, and try as they might they cannot get housing, so they sleep wherever they happen to end up at the end of the day.

If those of you who support the garage stop giving me money to pay the rent, I may join the ranks of “the homeless.”

Anyone can get sick, lose a job, get a divorce, and yes, become addicted and/or mentally ill. Perhaps it is this fear that we, too, are fragile – that maybe we are not as secure as we think – that causes us to box up people who don’t live in houses and slap a label on them. “The homeless.” Them. Not us.

I could tell you what we can do to help, but I think you already know: Affordable housing or at least free shelters, medical care for everyone, jobs that pay a living wage for those able to work, and so on. And I could outline the steps necessary to get this accomplished. And then everything will be all right, right?

No. We need all that, and those working toward it are doing good and meaningful work. But even if we get it all, we will not end homelessness in Prescott or anywhere else. In fact, I don’t think we can. After all these years, I have no solutions and I don’t think there are any. A solution implies a problem and creates a new label we can stick on anyone who doesn’t fit in our idea of society.

So here we are with “the homeless problem.” We have turned a group of people into a thing. Not just any thing, but a BAD thing. Something undesirable that we have to fix – or get rid of. Certainly something that has very little to do with us, our families and friends, and our day-to-day responsibilities.

I hear this kind of language and the attitude that underlies it from people I like and identify with. People who support the garage and are working to help others. Sometimes I hear it coming from my own mouth. But then I open the garage in the morning and talk and laugh with the guys, and play cards with some of them and tell many of them for the umpteenth time to get a plate.

We become a family of sorts (see the quips) and I am surprised again and again to remember that people are not a problem to be solved. They are my friends with their own experiences, problems, hopes and dreams.

They are us and we are them.

Pulaski and the Great Switcheroo

Pulaski was hitchhiking but mostly hiking
walking and walking some more, stalking the end
of another endless highway
in the parched desert of his particular dreams

Two lonesome wanderers of the wasteland
they departed each others company
high & happy, each heading back the way he came
their goals receding behind them in the great switcheroo…

Pulaski at the Mission

Not because of
hooligans
but
because of cops

So I stayed
at
the
mission

He
didn’t
have to
do that

But I’m
sure
glad
he did.

The photos and text are by my daughter Claudia. In September, she and I truck-camped the Tucson–to–Pennsylvania route that Doug (my late husband, her father) and I took on our bicycles 40 years ago. Both trips were great fun, and this time I learned that the Quixote was always a part of our lives. 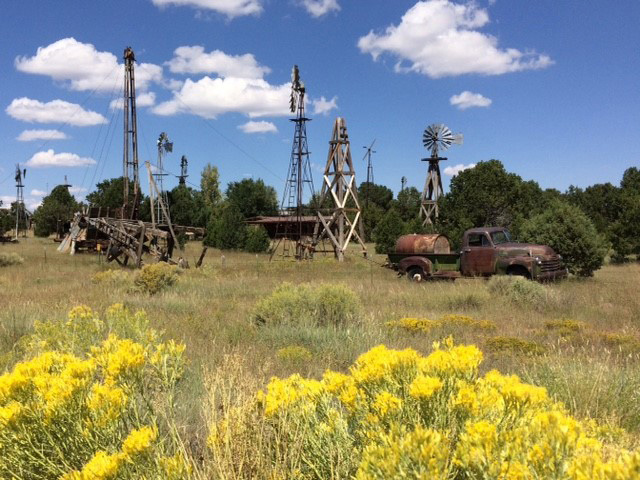 We were on the road across New Mexico, just before noon, when we saw an army of giants amassing on the horizon. 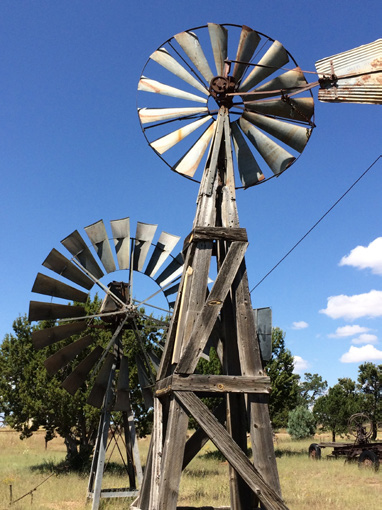 They marched upon us, coming closer… 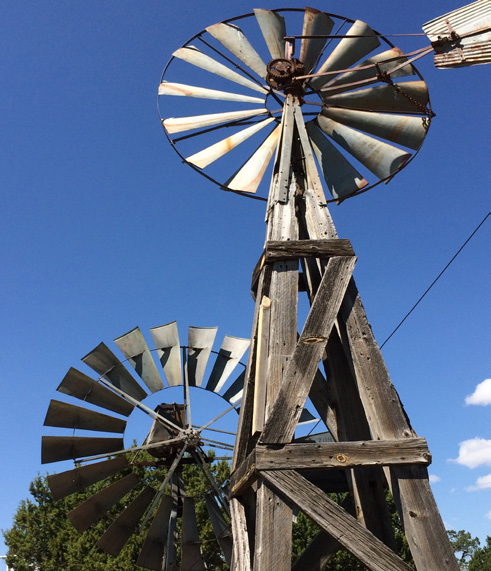 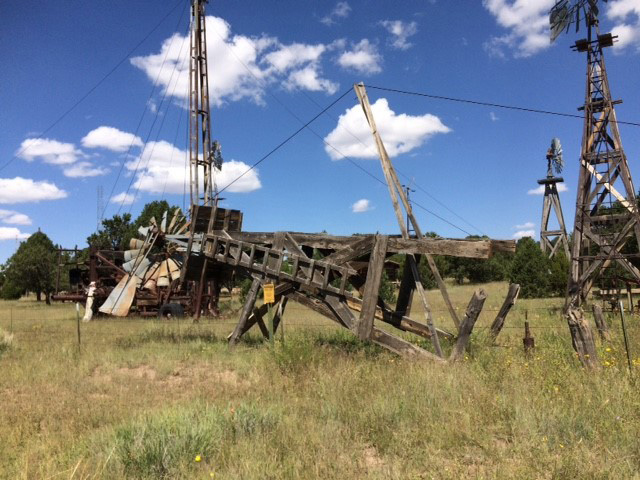 The battle was brief, but Quixote’s philosophical arguments, sharp wit and pointed sarcasm brought the Enchanter to his knees. 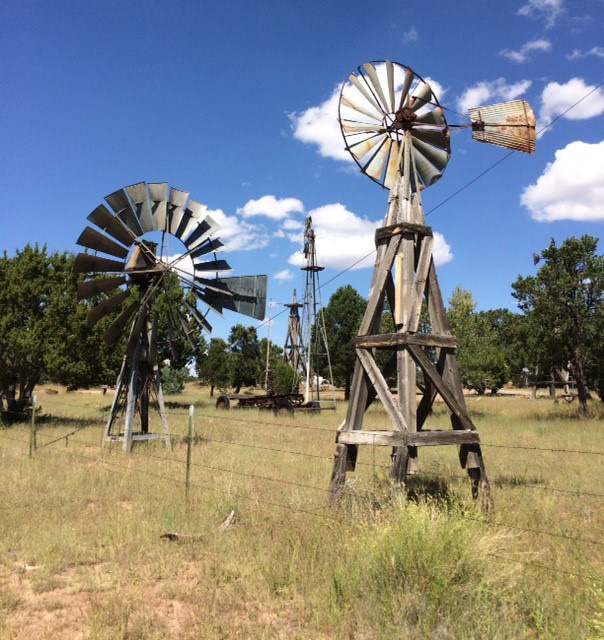 With their massive leader vanquished, the army scattered 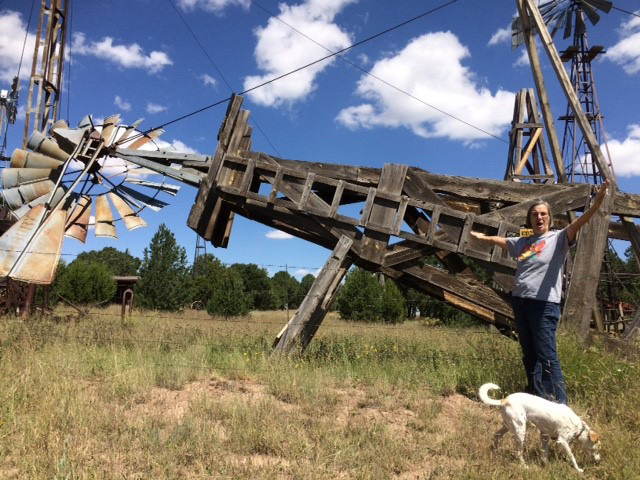 And virtue triumphed once again!

Quixote’s Garage opened 15 years ago the day after Christmas this year. It’s been a great ride for me and I hope for most of the people who have interacted with the Garage in all those years.

Many of you have supported us in a variety of ways – donating money and stuff, volunteering, visiting, taking whatever gifts we had available, and just being nice.

As a gift to all of you, Melcher Printing, who has printed the epistle for free from the beginning (THANK YOU), will bind all of the epistles together into a book. If you want one, please let me know. Call 7712637 or email [email protected].

Fifteen years means change, too. I have decided to close two days a week, Mondays and Thursdays. Still open 8:30-2 all of the other days, including weekends and holiday Mondays.

Also, Quixote’s chaplain, the Rev. Emilie Finn, will no longer be celebrating Mass here each month, but she will visit often (she says). She is called to do other things, but her heart is here. If you want to stay in touch, her email is [email protected].