Updates on what is happening at the Garage.

Thanks for the thanks

Each month the Garage receives a card with a note and a widow’s mite from a man who moved from Prescott to Tucson several years ago.

In December he wrote:

Once again, thank you for the hospitality. To this day I tell everyone about the Garage and how much it helped in my early sobriety. What a pleasure for the advancement in life and the meaning of service, from taking out the trash to cleaning dishes. Not bad in the learning of responsibility in my years in Prescott. Happy holidays.

I apologize for sending this so late but January has been a month of many events. One of them has been connecting with Birdsong Ensemble, a theater troupe of great acting ability and little technical skill. We are performing the play The Fantasticks for 4 performances a weekend. Also helping with a Catholic overnight homeless shelter, and visiting an old flame in a nursing home. And that’s not all LOL A month of many events so once again thank you for your hospitality.

Streetart at the Garage

This was some chalk art we did on the Garage patio under the direction of my daughter Claudia Selene. 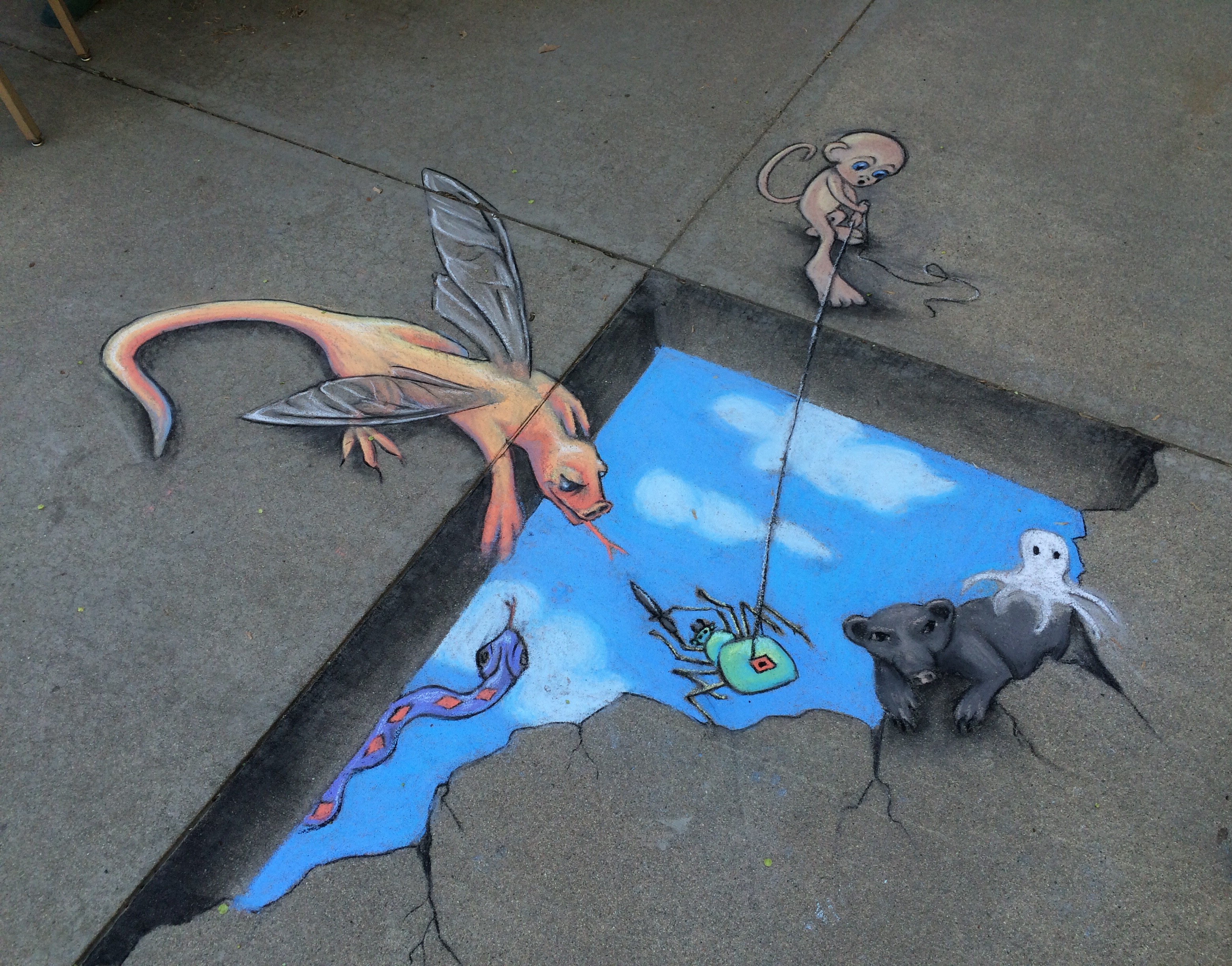 Meet Jigsaw, a new companion at the Garage

This is a photo out in the Granite Dells in Prescott of Jigsaw, my (the Garage’s) new dog. She’s learning to be a therapy dog just by being here. 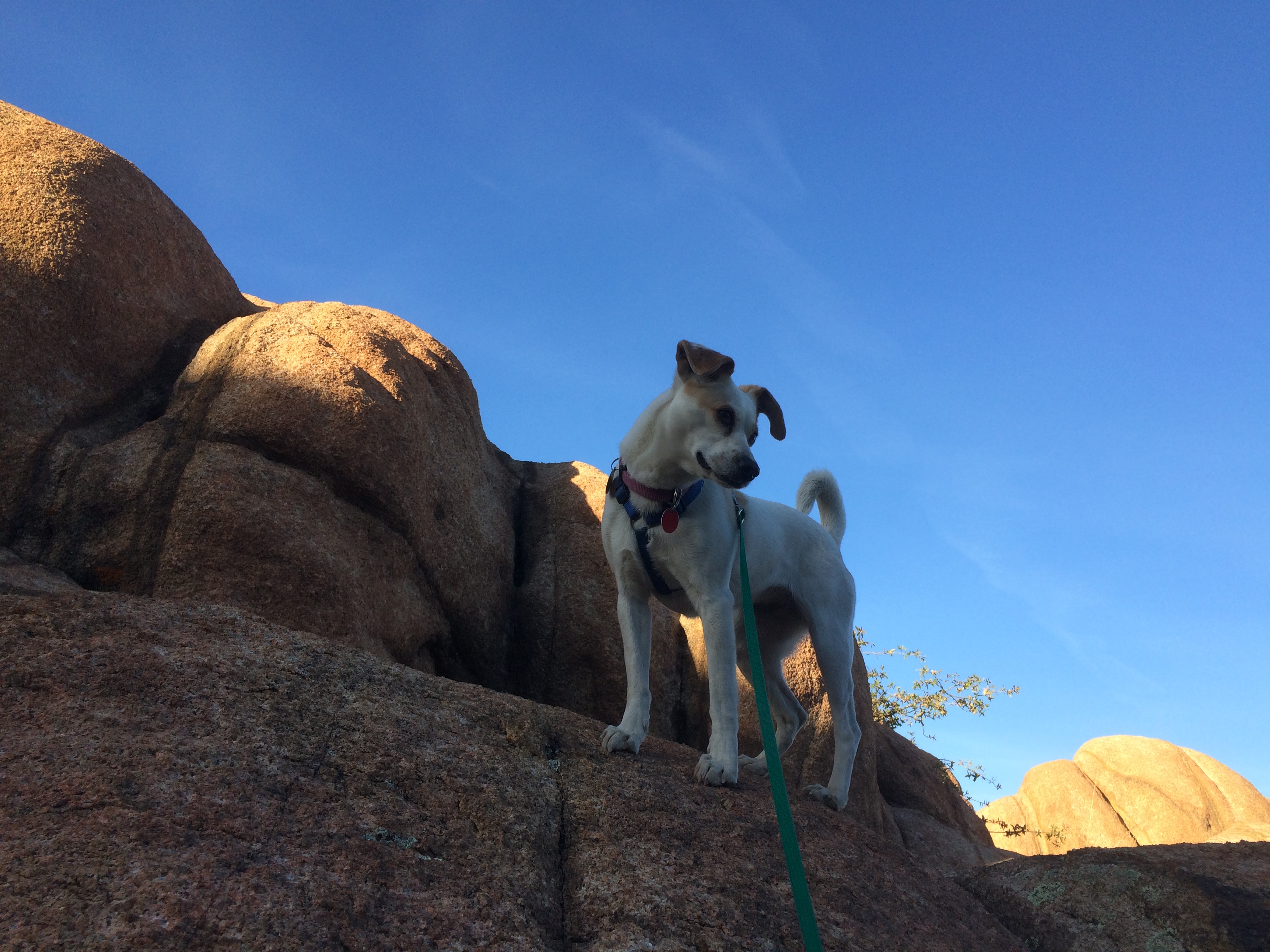 A Visit from Quixote

‘Twas the day before Christmas and all through the Garage
Not a creature was stirring. It was like a mirage.
No stockings, no hats, no gloves were in sight.
They had been given away to help guests through the night.

I hoped that those guests would be safe in their camps,
That no visions or critters would upset the tramps.
I thought of my truck, with a bit of a frown.
I was closed Christmas day; perhaps I’d leave town.

Then out in the yard there arose such a clatter,
I jumped from my chair to see what was the matter.
Away to the window I ran ‘cross the floor,
Opened the blind and pushed up the door.

The sun still shone brightly on the rocks just outside
And I knew that out there, there was no place to hide.
Then what to my skeptical eyes did appear,
But a guy on a bike. His intent was not clear.

He looked pretty grumpy, not lively or quick,
And I knew in a moment he wasn’t St. Nick.
More rapid than turtles, he climbed off his bike
Calling me names I sure didn’t like.

“Now, Soup Nazi! Witch! Now, Devil! Now, Saint!
Whatever you are, my job just can’t wait!”
He rolled through the gate, then up to the door.
I gauged he was not just some man who was poor.

I drew back inside and was turning around,
When into Quixote’s he came with a bound.
He was dressed from a free box from his head to his feet,
And surprisingly clean for a guy on the street.

He had lots of stuff all packed on his bike,
And he looked just like you. (We all look alike.)
His eyes were quite clear, but his cheeks showed some stubble.
I had nothing to say; I wanted no trouble.

The snipe that he’d found he held tight in his teeth.
He hadn’t a light, which was quite a relief.
He seemed to get past a slight nicotine fit.
Maybe all that he needed was to rest just a bit.

I heard a loud grumble rise up from his belly,
And knew all I had was peanut butter and jelly.
He looked almost happy, but clearly no elf,
So I smiled and relaxed, in spite of myself.

This was a nice guy, not some nameless jerk,
And quick as a wink, he went straight to his work.
He cleaned the whole place, including the toilet,
While I kept my mouth shut so I wouldn’t spoil it.

He finished the work he had come here to do,
Washing the windows, removing the goo.
As fast as he came, he left the Garage,
Leaving me in what others would call a mirage.

He climbed back on his bike, no worse for the wear,
Calling, “Quixote to all, and to all a good year.” 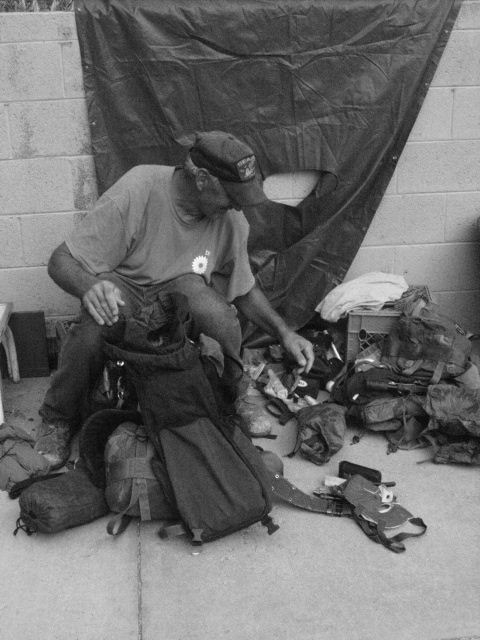 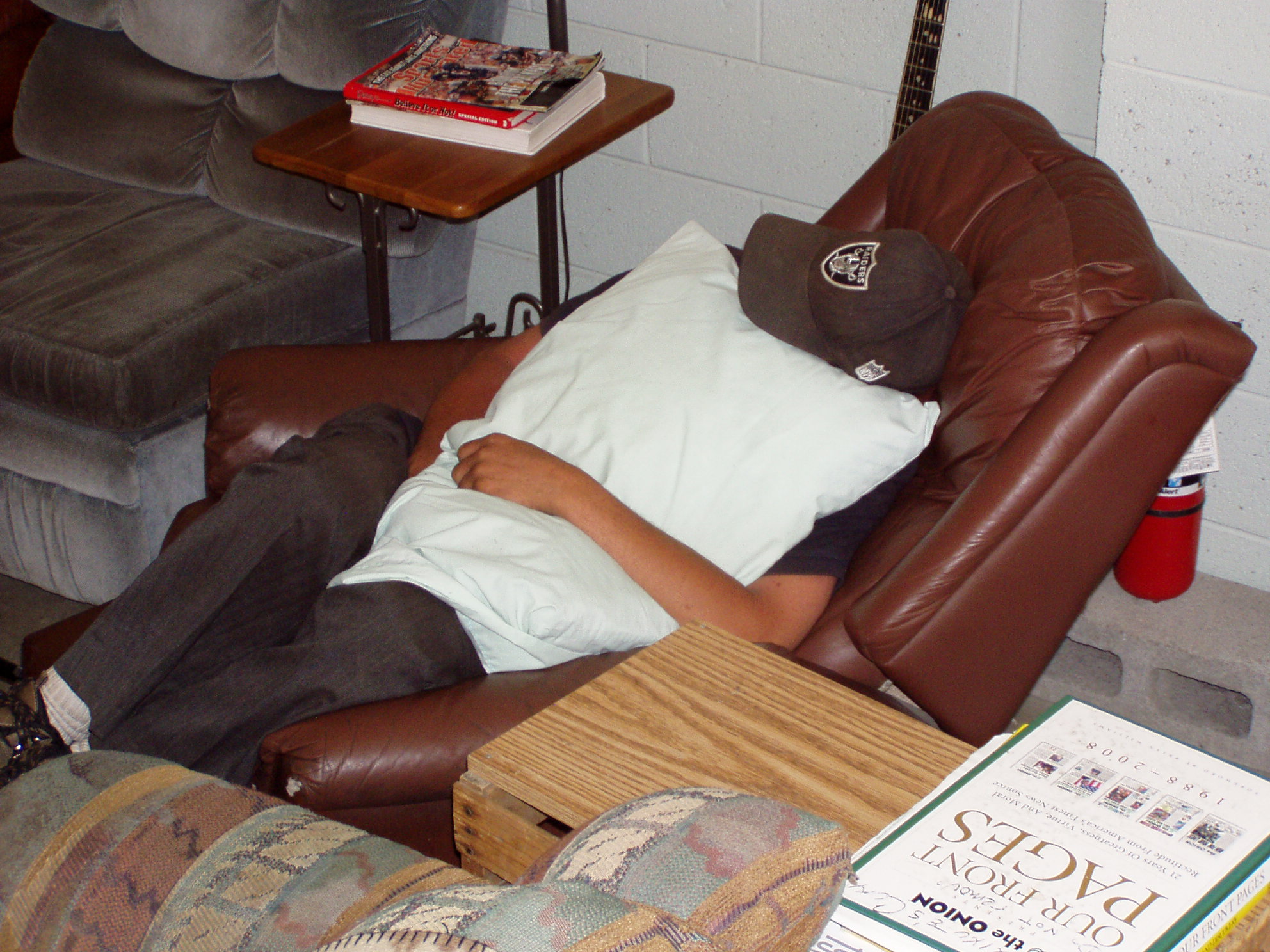