Sharing is caring, as they say.

I am the daughter of Lou (US American) and Carmen (German). The two met in 1975 in Germany and fell in love. Lou was an Army photographer. A pretty good one, too. Shortly after I was born, in September 1976, we moved to the States and my sister was born there in 1978. When she was a few months old, my mom left my dad. She was tired of him drinking all the time. So she took my sister and me back to Germany.

Even though I lived in the States after that, I never had any contact with my dad. All I had was a few photographs. I loved and admired him as long as I can remember. I’m not even sure why. I guess because he looked very strong and handsome to me.

And there was something in his eyes and smile that seemed familiar and warm. 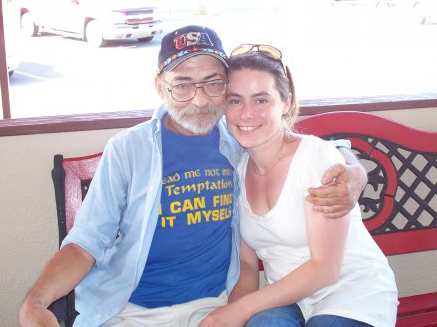 After moving back and forth between Germany and States on a pretty regular basis, I decided to stay in Germany in 1993. I was 16 years old and my mother, sister and stepfather continued living in California. In December 2006 my mom and my sister moved to Germany to live with me. She had divorced her second husband and she was ill. She couldn’t take care of my sister anymore, who at the time was 30 years old. When my mother gave birth to her, there were some complications and my sister has special needs. In 2007 I decided – once again – to look for my father and his family. This time I actually found my aunt and Grandmother! At the time they lived in New Mexico and they were happy that I had found them. They came to visit me in the summer of 2008 and we’ve been in contact ever since. My mother passed away in December 2008, so they were basically all the family I had, besides two aunts here in Germany, who are my mother’s sisters.

But unfortunately, my Grandmother and aunt didn’t know where my dad was either. During that time I met a former US military police officer who lives in Germany. We talked about my many attempts to find my father and he decided to help me. Being a former cop it was easy for him to ask the right questions in the right places. We tracked Lou down and by summer 2009 we had narrowed our search down to Arizona. Obviously Lou had been homeless for the most part of his life after my mother had left him 30 years earlier. I planned a trip to Phoenix, not knowing if I’d really find him. And a few weeks before I was going to fly there, my friend had the idea to write to all homeless shelters and services in Prescott and Phoenix. I talked to a lot of people on the phone. It seemed that quite a number of them had known Lou at one time, but no one had seen him recently or knew where I would find him.

Until one day I had Kris on the phone. She knew him. He had been a guest at the Quixote’s Garage several times. We had a pretty emotional conversation on the phone. She wasn’t able to give me any details, but she offered to forward my mail that I sent to the Garage. Which is what we did. A few days before I was scheduled to fly into Phoenix, Lou sent me an email (from a public library) and we decided to meet in Prescott.

And ever since, I’ve always wanted to give her something back. She sends me her newsletter. They arrive by mail and they always include stories written by her guests that really touch my heart. So this is basically my motivation for creating and maintaining this website. And I hope that others will enjoy the Epistle, the Writings and Wisdoms. If you do, and if you want to help, please visit the donation page. Any amount, be it $ 2 or $ 200, will help Kris. My contribution is to maintain this website to spread the word about this special place, the Quixote’s Garage, and about Kris. She is definitely one of the people I really admire for all that she does and gives.

There’s a lot more to my story. A lot more to why Lou and I never saw each other again. I just recently (late summer of 2013) found out by coincidence that he had passed away in November 2011. Which again adds a whole different dimension to our story. But that is… a different story.